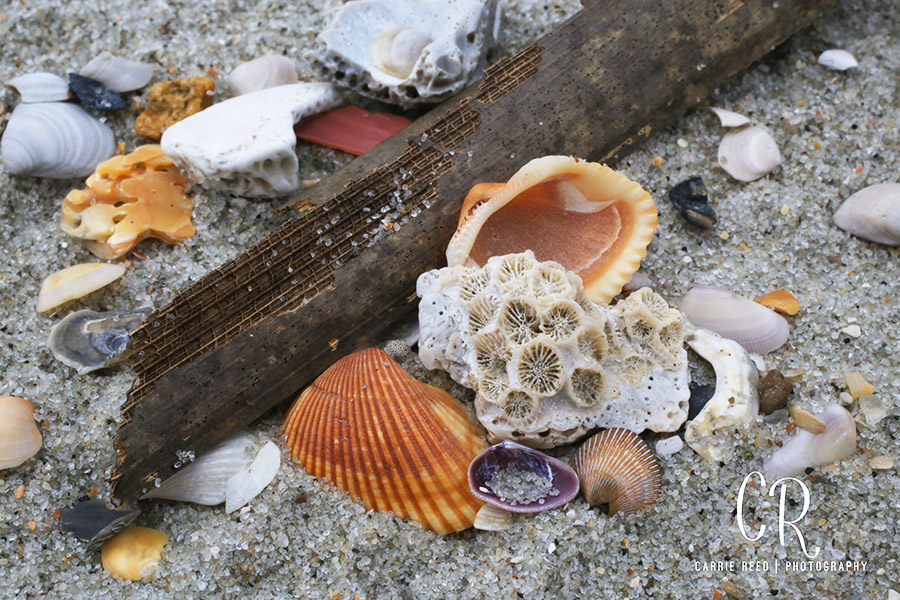 We just spent a glorious week at Garden City Beach, South Carolina, USA with extended family. I enjoyed doing some close-up shots with my 50mm 2.5 Macro lens and focused on the shells my daughter and I spent many mornings collecting. Macro photography on the beach can be a challenge. I was in such a funny position bent over on my elbows trying to get close to the shells without getting sand on my camera that my mother-in-law thought I was doing beach yoga! I should make up a new pose name!

Garden City Beach is just south of the more famous Myrtle Beach on the Atlantic Ocean. The shells we found were mostly of the smaller variety or pieces of what we knew were once larger shells. You also can get lucky and see dolphins off the shore. This time of year turtles are laying eggs on the beach. We came across a turtle nest being relocated one morning as the mama turtle decided to lay her eggs on a walking path from the road–not a smart spot. So official people came and moved it very, very carefully by digging a new hole on the dune just a short distance from the path and moving the eggs over. They then roped it off and put up a sign. It is against the law to mess with turtle nests.  Three years ago at Garden City Beach we were there in August and I got to see a hatched nest dug up and a lone turtle baby making its way to the ocean! That was pretty cool.